Borderlands 2 released, one of the most impressive non-photorealistic games around?

Borderlands 2 is now released and, as with the first game in the series (released in 2009), this also carries the torch of cel-shaded graphics in a major way. You can see the game in the pic below, the results look great of course (much better than the first game but then again this was released a number of years ago now) and the visual style lends itself incredibly well once more to the dark comic mood vibe the title is going for. 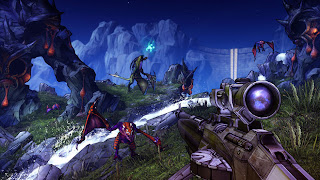 Borderlands 2 (built on Epic Game's Unreal engine it should be mentioned) is another example of a mainstream gaming title eschewing photorealism with truly great results.
Posted by Christos Gatzidis at 9/30/2012 11:30:00 pm