Beneath A Steel Sky sequel?

I have blogged already about Revolution Software's Broken Sword Kickstarter campaign; it appears now that they are throwing another enticing bit of information in the mix, should the amount of support reach $1m they are then prepared to use the extra funds for the preparation of a Beneath A Steel Sky sequel. 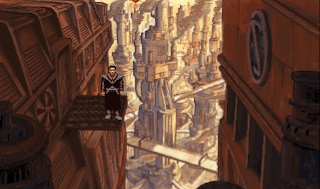 Beneath A Steel Sky is of course one of the seminal adventure games (with excellent hand-painted graphics and a very intriguing futuristic back story) first released by Revolution Software in 1994. A sequel for this has been long awaited and it would be fantastic if this was achieved on top of a new Broken Sword game (which is now a certainty looking at the Kickstarter page, there are 6 days to go, around $563K has been raised with the original goal being $400K).