Ouya is a new experiment that has been proposing, via the ever-popular Kickstarter, a console which is powered by the Android OS. The benefits of this of course are obvious and multiple (a mobile app model for the TV, open source mentality etc.). According to the company behind this (Boxer8), the console is alleged to be costing $99 and in terms of specs will carry an Nvidia Tegra 3 processor supporting 1080p HD output (via HDMI), 1GB of RAM plus 8GB on-board flash storage. 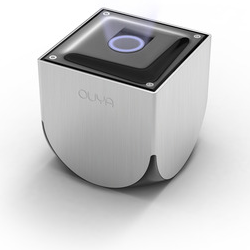 The device has attracted both support (OnLive for example has recently announced it will ship with Ouya) and a variety of criticisms (from the limitations of the hardware specification to the business model attached to this) but this still remains a hugely interesting development and one which is worth following over the next few months (especially seeing it has already picked up over $6 million of pledges in Kickstarter).
Posted by Christos Gatzidis at 7/30/2012 10:31:00 am