iControlPad, a retrofitting option for your iPhone

I have succumbed to buying a Sony Xperia Play now based on the both the hype but also the analog gamepad offered with the phone, however it appears that users of devices such as the iPhone can retrofit something similar and not rely on touchpads anymore for gaming action (or indeed interaction of similar sort). 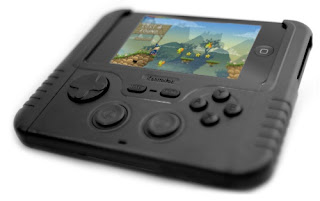 The iControlPad operates via Bluetooth, has 6 face buttons, 2 rear buttons and 3 pads/nubs and actually fits other mobile devices as well (including Android phones), although it is reportedly a bit hit and miss on that front (so it might be worth checking experiences from other users with it before forking out). More information can be found here.
Posted by Christos Gatzidis at 4/28/2011 05:48:00 am