Valve is a strong supporter of biometrics in games

In one of the most interesting, at least to me, recent Game Developer Conference talks, Mike Ambinder from Valve (the development studio/engine vendor/owner of one of the most successful online game portals) outlined the importance and huge future potential of game biometrics. According to Mike; "Current control schemes provide one-dimensional gameplay - they map only player intent. What you don’t get with that is a reading of feeling or long-term goals. Those feelings are not communicable though current controls, and at Valve we want to attack that issue".

Ambinder, currently holding the (particularly ungame-like!) role of experimental psychologist at Valve focuses, as revealed from the above statement on, for example, how players feel while in a heated battle or when encountering a tough puzzle. A number of technologies have been examined for this so far such as heart-rate measurement devices, eye-trackers, brain-wave activity monitoring interfaces and others. 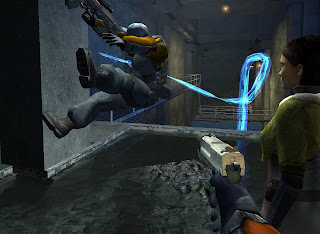 Interestingly, Adminder dismisses (for now) BCIs (brainwave interfaces) as the brain is too noisy to read with current inexpensive devices. Instead, in an experiment using the Left 4 Dead game (discussed during the GDC talk) Valve measured electrical resistance of the player’s skin. This was in order to get an impression of their interest and emotional investment in the game. The data from this was used to increase the challenge of the game during lull of activity, thus producing adaptive manipulation of the games difficulty.

The subsequent survey demonstrates that when the biometrics adaptive mode was in play the subjects found the game significantly more fun. It'll be great to see where Valve can take this and also very impressive to see a company that could be churning out another installment of Half-Life instead investing some of its resources to more visionary research like this.