Make Something Unreal Live 2013, Bournemouth University team in the 4 finalists

This has made it last week on many websites quite prominently and I am very glad to also now feature this in this blog too; a team consisting of second year Bournemouth University students (6 from the Games Technology degree and one from our Music and Audio Technology degree) has now made it to the final four for the Epic Games'/Wellcome Trust Make Something Unreal Live 2013 European competition. 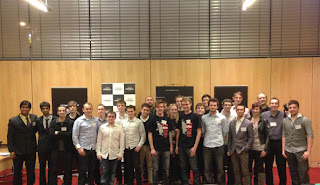 The team is called Static Games (pictured above amongst the other student teams) and their game is titled Mendel's Farm (the theme of the competition this year, as set by Wellcome Trust, is Mendelian inheritance). All four finalist teams will now start working on their game (using the Unreal Development Kit), guided by mentorship from 4 UK game dev studios, with the goal being finishing this during the Gadget Show Live event in April 2013 (taking place at Birmingham's NEC). The winning team will receive a full commercial Unreal Engine 4 license.
This is great news (you can read more about it on countless site including the official Wellcome Trust one here), well done to our 7 students for their hard work and here's to hoping they will win this in April!
Posted by Christos Gatzidis at 12/08/2012 12:44:00 pm