The other day I got round to finishing reading the recently released Jacked book by Dave Kushner. This is the unauthorised story behind the conception and creation of the Grand Theft Auto series and I can recommend it highly to anybody who liked the author's previous book (Masters of Doom, which focused on the id Software story of course and the development of their seminal games such as Doom and Quake). 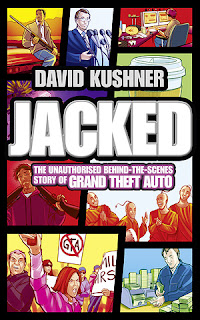 The book does have the tendency to be a bit sensationalistic in its narrative and descriptions (a bit like Masters of Doom in fact) which can be seen as a criticism considering this is not a fictional tale but, as mentioned above, remains a hugely interesting read for Grand Theft Auto fans or indeed anyone who wants to learn about how a modern gaming title franchise was built over a period of time and stories about the people behind it.
Posted by Christos Gatzidis at 5/05/2012 07:30:00 pm