I have posted about this before when the news first broke out but seeing that this is one of my favourite games ever and there is now more information (which I read at Eurogamer) about this it is definitely a topic worth revisiting. Sierra Online's evergreen Leisure Suit Larry 1 is getting an HD remake which will also be released on many platforms (Android, Gaikai, iOS, OnLive, PC, PlayStation Network, Mac, Steam, Xbox Live Arcade are already mooted). More importantly the publisher, Replay Games, has secured the help of the original creator Al Lowe (who designed all games up to the last proper LSL game, the seventh outing of the series) to revive this. 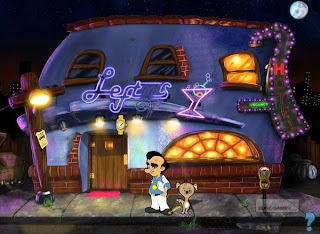 Other important news on this include that the developer (Adventure Mob) will actually be using the Unity engine for the development and also that Al/Replay Games are not ruling out new Larry games should these ones do well commercially (similar to the Secret Of Monkey Island remakes which spawned Telltale's Tales Of Monkey Island). On the top of that, screenshots and concept art from the game are now released and it looks fabulous, with an HD take on the very cool stylised, hand-drawn graphics LSL 7 had. Very much looking forward to this and of course any new Larry titles that may spawn on the back of it!
Posted by Christos Gatzidis at 11/22/2011 10:40:00 pm