Panasonic has, rather unexpectedly, announced a new mobile gaming device that will mostly target MMO players. Titled the Panasonic Jungle and pictured below, the only title announced so far for the system is “Battlestar Galactica Online,” a massively multiplayer online (MMO) game (allowing hundreds of people to play with or against each other simultaneously). The game is browser-based which leaves many questions open (why not use a netbook for example and go for this?). 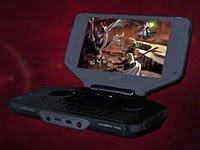 Panasonic has famously produced the 3DO game console in the past which was an enormous flop and it remains to be seen whether this fares any better. The online gaming targetting is interesting enough as a concept but the competition is already fierce in that area. Pricing has also yet to be confirmed.
Posted by Christos Gatzidis at 10/09/2010 02:37:00 pm